I recently started playing around with SymPy as a kind of local alternative to the increasingly frustrating Wolfram Alpha, and found an ergonomic way to interact with it inside org-mode using Babel to get pretty live-previews of the equations being produced.

This is a great environment for interactive symbolic calculation, and could even be used to keep derivations and mathematical computations inline inside the papers they’re included in. Looks like there’s a decent amount of prior art for doing this in Jupyter, but I tend to prefer Org and Babel where possible. 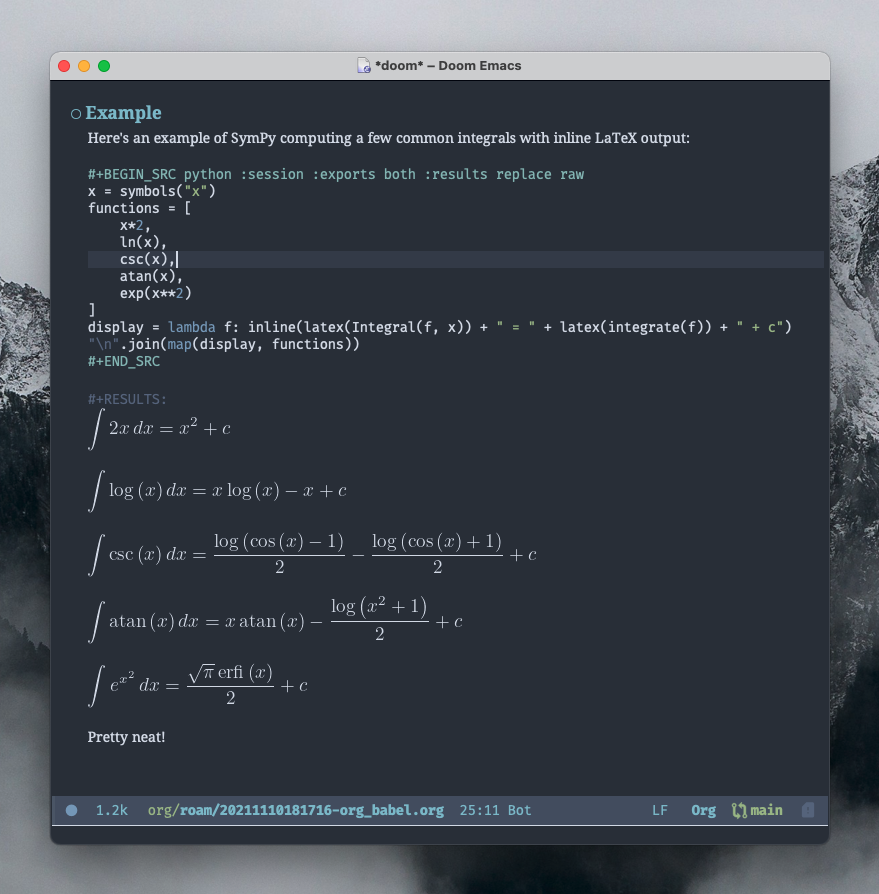 The output of SymPy in Babel rendered as inline LaTeX

One needs Python and SymPy installed, and LaTeX set up well enough that previewing LaTeX blocks in org-mode via org-latex-preview is working. I’m also using org-fragtog for the automated display of inline LaTeX, but that’s not a requirement.

By default, org-mode will render any LaTeX inside e.g. $inline$ blocks, \[multi-line blocks\], etc if they appear inline alongside the rest of the text in an org file.

What we’d like is to have it render the output of a Babel block - it doesn’t render this by default. Babel even has a latex output option, which wraps the output of a block inside #+BEGIN_EXPORT latex, but this still does not render inline - only in, for example, subsequently produced PDF files.

Note: using raw, multiple runs of the same cell turn out to continuously append output to the #+RESULTS block; replace is ignored. Thankfully drawer also works, and is compatible with replace.

We need to include a preamble Babel block somewhere in the org file, defining a helper that will wrap raw LaTeX strings for inline display:

Then, wherever we want to use SymPy and render its output, we include a Babel block with raw output (here we compute and display a few common integrals - although admittedly some are in quite a non-standard form), making use of SymPy’s latex formatter to generate LaTeX strings we can stitch together. The #+RESULTS block ends up containing valid LaTeX which renders automatically (if using org-fragtog) or which can be toggled using org-latex-preview.

Which spits out something like the image at the top of this page. Make a change, hit C-c C-c, and get updated equations from SymPy near-instantly.